In recognition of National Prevention Week, we are drawing attention to health issues related to substance abuse and prevention. National Prevention Week is an annual health observance designed to increase public awareness of, and action around, substance abuse and mental health issues. This year’s theme is: “Your voice. Your choice. Make a difference.”

Drug poisoning is the most frequent type of poisoning that occurs in the United States. In fact, since 2009, more people have died each year from drug poisoning than from motor vehicle crashes.

The map below shows the prevalence of drug poisoning deaths per 100,000 population in Ohio, Kentucky, and Indiana (2006-2010). Darker colors represent higher death rates. Areas with no shading or borders represent counties for which data is not available. 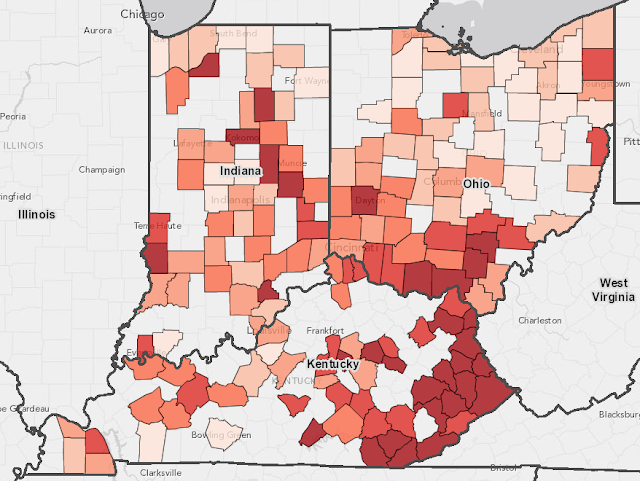 How is your community handling the challenges associated with drug poisoning? What evidence-based best practices can you suggest to reduce the number of drug poisoning deaths? Post a comment below to join the conversation.

Map is based on data from the Centers for Disease Control and Prevention (CDC) National Vital Statistics System data. This and other CDC data sets are available in HealthLandscape’s Community HealthView data library.

Other sources include the CDC National Center for Health Statistics Data on Drug Poisoning Deaths Fact Sheet and data from the National Vital Statistics System, 2010.