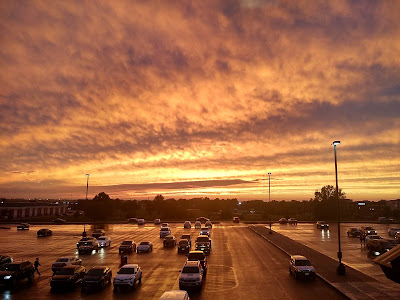 This past weekend was my daughter’s homecoming dance at her high school.  I took this picture before the dance, with the sun going down and students just beginning to arrive.  They couldn’t ask for a better start to the evening.
I have to admit that I’ve never taken part in my own high school’s homecoming activities as an alumni, which says more about me than anything about my alma mater.
This did get me thinking, though.  How many of the folks I work with have gone to their old schools for Homecoming?  Why haven’t they?  Do they live too far away to attend?  I’ve never lived any more than 20 minutes from Edgewood High School (and the Wehr Road Hatchet Man), so I have no real excuse.  But what about other folks on the HealthLandscape team?  I know someone in DC is from Texas, and another in Seattle is from New Jersey.  Is my geographically rooted existence the norm?  Or am I an outlier?
And faster than you can say “Curiouser and curiouser!”, I’m heading down a rabbit hole of place of birth and migration data.  What can I learn and how can I visualize this with GIS? 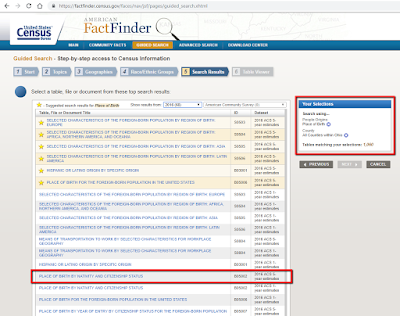 The first I did was visit the American Fact Finder web site and download Place of Birth data for all 88 counties in Ohio.  For these maps I wanted to have as much detail as possible, including more rural areas of Ohio, so I used the five-year aggregate file rather than the 1-year file.
It looks like about 70 percent of residents of Butler County, Ohio are native to Ohio (not necessarily same county, but I’ll not hold that against them).  And just perusing the Percent Natives Born in Ohio column, it looks like my home county has a fair number of transplants.

I logged into HealthLandscape and used the Map My Data tool to upload and create a thematic map of that information for all counties in Ohio.    Lots of interesting information here.  Butler County (highlighted in red) is sort of in the middle of the pack when it comes to out-of-state immigration.  It’s also interesting to see the difference between central ohio — driven by Columbus and Ohio State University, south eastern border counties — with apparent inter-state migration from bordering West Virginia and Kentucky, and the area between the two — predominantly Ohio’s Appalachian region. 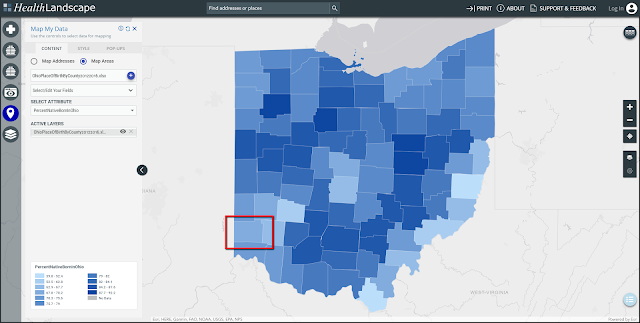 So, what did I learn?  My home town (or at least my county) isn’t nearly as ‘rooted’ as I once thought.  Am I an outlier?  It’s not clear, and I’ll need to do a little more digging and exploration using Map My Data and exploring HealthLandscape’s Community HealthView library of data. Next time.