The Hospital Readmissions ReductionProgram (HRRP) requires hospitals to pay penalties if Medicare readmissions for common diagnosis are too high.  Despite increasing evidence that readmissions are more a result of social factors largely outside the control of hospitals, readmission rates and penalties are not risk-adjusted for socio-economic factors.  Not surprising given the socio-economics of the region, safety-net hospitals in the Appalachian region have higher readmissions and are more likely to receive higher penalties, with hospitals located in the most distressed counties of the region having the highest rates and most severe penalties.  These results highlight the importance of risk-adjusting for socio-economic factors for under-resourced regions and provide insights into the potential impacts of payment reform on safety-net clinics.
In an effort to control Medicare costs, the Hospital Readmissions Reduction Program was created as part of the Affordable Care Act.  The program requires hospitals to pay penalties if readmissions for common diagnosis such as Acute Myocardial Infarction, Heart Failure, Pneumonia, COPD, and Hip/Knee Replacement are too high. The HRRP has been levying fines on hospitals since the 2013 fiscal year, with maximum fines increasing from a 1% reduction in base Medicare Inpatient claims payment (in 2013) to a 3% maximum reduction in 2015. For fiscal years 2015 and 2016, close to 4 in 5 hospitals in the U.S. were fined for excess readmissions, though the majority received fines of less than 1%.
The first few years of data from the HRRP have shown that safety-net hospitals are more likely to receive higher penalties, with data indicating that factors affecting readmissions are largely outside the control of hospitals (Gu et al., 2014).  This is particularly troublesome for the Appalachian region, which has higher rates of poverty, less education, and worse health outcomes when compared to the United States as a whole (Appalachian Regional Commission, 2015).  A recent Kaiser Health News report noted that four hospitals have received the maximum readmission penalty all four years of the program, with three of these hospitals located in the Appalachia region (Kaiser Health News, 2015).  For the fiscal year 2016, about one-third of the 38 hospitals receiving the maximum penalty were located in Appalachia.
Hospital Readmission (FY 2015) & Dual-Eligible Status (County)
Source: CMS Final Rule MRRP, 2015; CMS Geographic Variation PUF, 2013; Appalachia Data Portal
Using a combination of web-based mapping and data visualization tools, we examined whether hospitals in Appalachia are more adversely affected by the HRRP than hospitals outside the region.  The table above shows the relationship between hospital readmissions (at the hospital level) and dual-eligible for Medicaid population (at the county-level).  Overall, almost 90% of hospitals in Appalachia were penalized for excess readmissions in 2015 (compared to about 80% for the U.S.), with more than 20% receiving fines of 1% or greater.  Moreover, hospitals with high readmission rates were located in counties with higher percentages of dual eligibles, with the largest fines levied against those hospitals located in counties with dual eligible populations of greater than 30%. The image below displays the difference in the percent of dual eligibles for the county in which the hospitals are located by whether the hospitals received a 2% fine or greater.

Source: CMS Final Rule MRRP, 2015; CMS Geographic Variation PUF, 2013; Appalachia Readmissions Explorer
There are also clear geographic patterns within Appalachia.  Hospitals with fines of greater than 2% are concentrated in central Appalachian, which is the most distressed region in Appalachia, with high rates of poverty and unemployment, and low rates of education.  Further, half of all the hospitals located in Appalachia that received fines of 3% in 2015 were located in distressed counties.
Appalachian Regional Commission, County Economic Status FY2016 (Distressed Counties in Red) 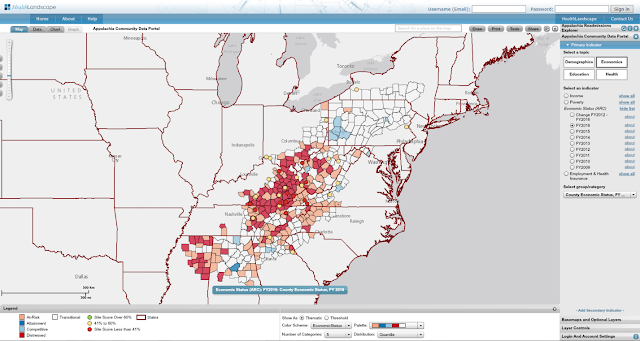 Source: Appalachia Data Portal & Readmissions Explorer
The Hospital Readmissions Reduction Program (HRRP) has been criticized for not risk-adjusting for the socio-economic circumstances of the populations that they serve, despite increasing evidence of readmissions being driven by factors largely outside the control of hospitals.  While there has been some movement towards risk-adjusting for socio-economic factors (the National Quality Forum has begun a two-year pilot studying the potential for risk-adjustment of socio-economic factors and the U.S. Senate has introduced a bill to incorporate socio-economic factors), changes to the penalties do not seem imminent.  Policy-makers need to consider risk-adjusting for social determinants of health and geographic variation for hospital readmissions, while also applying lessons learned when moving towards value-based payments for physicians and the detrimental impact that not risk-adjusting may have on safety-net clinics.
HealthLandscape Web-Based Data Visualization Tools
We used a combination of web-based mapping and data visualization tools, including the Appalachia Readmissions Explorer and the Appalachia Data Portal.  The Appalachia Readmissions Explorer is an interactive mapping tool that allows users to quickly compare readmissions for hospitals in the Appalachian Region.  Hospitals are colored red, yellow, or green – based on whether hospitals have readmissions worse, no different, or better than national average for all-cause readmissions and for the individual diagnosis of Heart Failure, Heart Attack (AMI), Pneumonia, COPD, Stroke, and Hip/Knee Replacements.  Mortality data have also been added which allows users to explore readmissions and mortality rates.  Users can also filter by whether a hospital was fined for excess readmissions in 2015, the percent amount of fine, and by whether a hospital received a penalty as part of the Hospital Value-Based Purchasing (HVBP) Program.  In addition, users can use the Stats tool to perform statistical analyses to explore relationships between hospital readmissions and mortality rates and population health indicators for the county in which the hospital is located.
The Appalachia Data Portal is an online tool for exploring demographic, education, income, and health disparities for the 420 counties in the Appalachian region. The data included in the Appalachia Data Portal come from a variety of sources, including the American Community Survey, the Appalachian Regional Commission, the Robert Wood Johnson County Health Rankings, and the Centers for Medicare & Medicaid. The tool allows users to visualize economic, demographic, and other types of data for the Appalachian region using maps, graphs, and trend charts.  Users also have the ability to examine the relationship between two indicators (for example, Diabetes and Poverty) with side-by-side maps and a comparison tool that uses percentiles to visualize the relationship between variables.  The Appalachia Data Portal provides multiple methods for exploring population indicator disparities throughout the Appalachian region, and is a helpful tool for identifying health disparities and bright spots within the region.