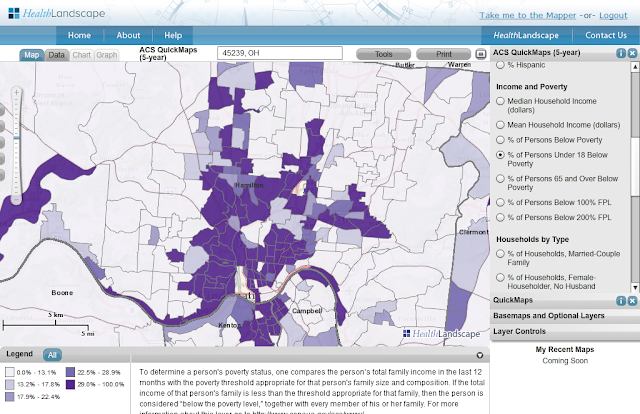 A map generated from HealthLandscape’s ACS QuickMaps tool showing percent of persons under 18 below poverty in the Greater Cincinnati region.

HealthLandscape‘s ACS QuickMaps tool was developed specifically to help you take advantage of the rich data available within the American Community Survey (ACS), the Census Bureau’s newest product. Listed below are some FAQs about the survey, and how HealthLandscape makes this data available to you.

Is the American Community Survey the same as the ten-year census?

No. In fact, the ACS replaced the long form of the census in 2010. In simplest terms, the census is conducted every ten years, and is designed primarily to get a “head count,” a count of the number of people in the United States and their general characteristics. The ACS is conducted every year and generates 1-year, 3-year, and 5-year data.

What kind of data does the American Community Survey collect?

The ACS collects demographic, social, economic, and housing data such as age, disability, poverty, education levels, race and ethnicity, and employment. (For a full list of topics, click here.)

What is the difference between 1-year, 3-year, and 5-year data?

Refer to the Census Bureau’s chart for a detailed explanation. In general:

HealthLandscape uses 5-year ACS data in our QuickMaps tool, and 5-year, 3-year, and 1-year data in our Community HealthView tool.

Where can I get more information about the ACS data sets included in HealthLandscape?

We publish metadata (data about the data) for each data set.

If you’re using QuickMaps, look at the bottom center of the screen. You’ll find general information about the data set, and a link to the Census Bureau for more information.

If you’re using the Community HealthView tool, enter “American Community Survey” in the search box to locate ACS data. Then click the “about” link next to the data set. You’ll see detailed metadata, including an abstract, type of data (1-year, 3-year, or 5-year), whether it’s state, county, or tract-level data, what fields are included in the data set, and other useful information.

All ACS data is downloadable from the Census Bureau’s web site. Our goal at HealthLandscape is to do some of that hard work for you, to make public data sets available in a way that’s immediately useful to you and your organization. We want to help you show the need, tell your story, and explore alternatives.

Sign up for an Intro to HealthLandscape webinar to see ACS QuickMaps and Community HealthView in action. If you have specific questions about HealthLandscape or the American Community Survey, contact us at info@healthlandscape.org, or call 513-458-6674.