info@HealthLandscape.org 202.655.4933
During the week of July 10th to the 14th, 2017, HealthLandscape attended the annual Esri User Conference in San Diego. Part of the conference was designated to showcasing attendee’s various cartographic products in a map gallery. HealthLandscape submitted two products to this year’s Map Gallery, a small format map depicting the mosquito season in the United States in relation to the Zika outbreak, and an Esri Story Map showing a pre- and post-Affordable Care Act (ACA) comparison of uninsurance rates for the United States.  A story map is an online map that allows a map maker to combine narrative text, images, and video clips into a map, to tell a story. 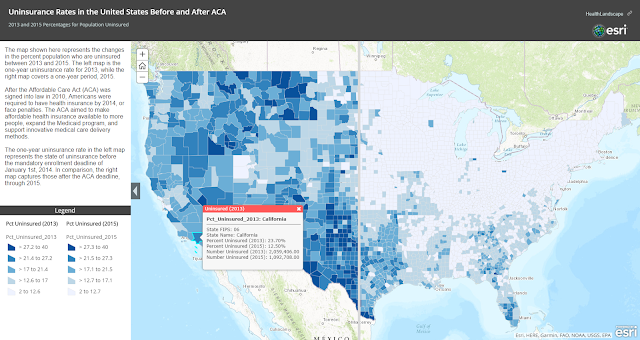 This Map Gallery submission focused on uninsurance rates before and after the ACA went into effect on January 1st, 2014. From this date forward it has been a requirement for U.S. Citizens to have health coverage without incurring a penalty. The ACA was enacted to provide cheaper health insurance, expand Medicaid, and support innovative medical care delivery methods. This map shows the county rates of the population who were uninsured in 2013 (left), compared with the same map on the right of the swipe bar, using 2015 rates. This shows the drastic decrease in uninsurance rates as gains were made in Medicaid and Health Insurance Marketplace coverage around this time. Most of the areas in the 2015 map that show the least amount of change since 2013- like Florida, Texas, Missouri, or Alabama- are states that chose not to adopt Medicaid coverage. States like California that did adopt the expansion have decreased their overall rates of uninsured. The example shown in the map is for Los Angeles County, California, where the uninsurance rate dropped from 23.7% in 2013 to 12.5% in 2015, a difference of a million people.
Even though the recent attempts to repeal the ACA have failed for now, there is still a desire to repeal or alter the ACA.  The House proposal would eliminate health coverage for 14 million Americans in 2018 and then an additional 23 million by 2023.1 Under this proposal, called the American Health Care Act (ACHA), states like California, that saw a decrease in uninsurance by one million, is projected to have total coverage losses of upwards of 2.5 million people, through Medicaid, employer-sponsored insurance, and private insurance.1 The map shown below was created using data reported by the Center for American Progress and with estimates from the Congressional Business Office (CBO), and shows a state-by-state breakdown of the number of nonelderly Americans projected to lose health coverage under the ACHA. 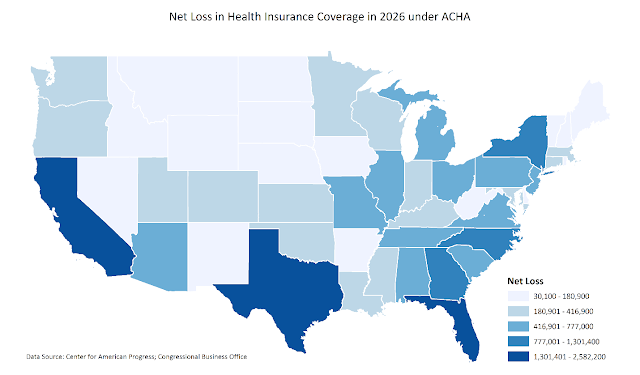